Bernie the Bus travels 1,000 miles to help those in need

Bernie the Bus and its volunteers have travelled more than 1,000 miles helping to collect and deliver food to local charities.

Back at the end of March, when coronavirus began to spread and everything seemed to grind to a halt, there was a bus called Bernie.

Bernie had been taking his elderly friends to day centres and on trips out. He also took local sports clubs to their fixtures and various groups to events. But when coronavirus struck – these trips were cancelled, and Bernie was left feeling sad and lonely.

They decided they would put together a team of volunteers and drive around local villages dressed up and playing music out of the back of Bernie, while they collected food for local charities. This proved extremely popular, with lots of people leaving food on their doorsteps and having a boogie with Bernie from a safe distance.

So far, Bernie the Bus has travelled more than 1,000 miles on its charitable mission, and has collected over 1,000 crates of food and toiletries for the Vineyard Food Bank, Winslow Food bank, Buckingham Food bank, Berryfields and Water Mead support groups as well as many locals in need. In addition, Bernie has helped collect 50 boxes of fruit, veg and pet food for the RSPCA Blackberry Farm Animal Centre, Animal Antiks and the Green Dragon Eco Centre.

Cllr Paul Irwin had this to say about Bernie’s adventures:

“Thanks to Bernie the Bus, we’ve walked over 400 miles and danced around over 20 villages – including visiting some of them three times!

“We’ve donated £800 to the Vineyard Food Bank in Aylesbury and brought new batteries for a medically retired soldier who was stuck in his home. We raised this money through a JustGiving page. We’ve also delivered over 120 potted plants to the over 70s in three villages to mark VE Day with a grant from Buckinghamshire Council.”

Looking to the months ahead, Cllr Ashley Waite commented:

“We’ve now set up a network of collection boxes in the same villages, collecting once a week in Bernie for the food banks. We hope to carry this on as long as the need is still there.

“We’re planning to start the music runs up again in November and take Bernie’s close friend Santa around the villages collecting toys for looked after children and families in Crisis in Bucks, working with Cabinet Member Mark Shaw. We’ll also give out chocolate to kids and collect tins at the same time.

“Finally, we’re going to open a JustGiving page with the Vineyard to try and raise £1,000 – which would buy Christmas roast dinners for 100 families in the Vale that are currently living in poverty. We’ll buy and deliver the ingredients the week before Christmas. Hopefully we can get sponsors as well, so we can buy some crackers and trimming for the families to go with it all.”

“Heart of Bucks is delighted to have provided funding for Bernie the Bus to support their important work. A fantastic community resource that sprung from a crisis, the bus is a great example of the spirit and endeavour that Buckinghamshire has demonstrated throughout the past six months.” 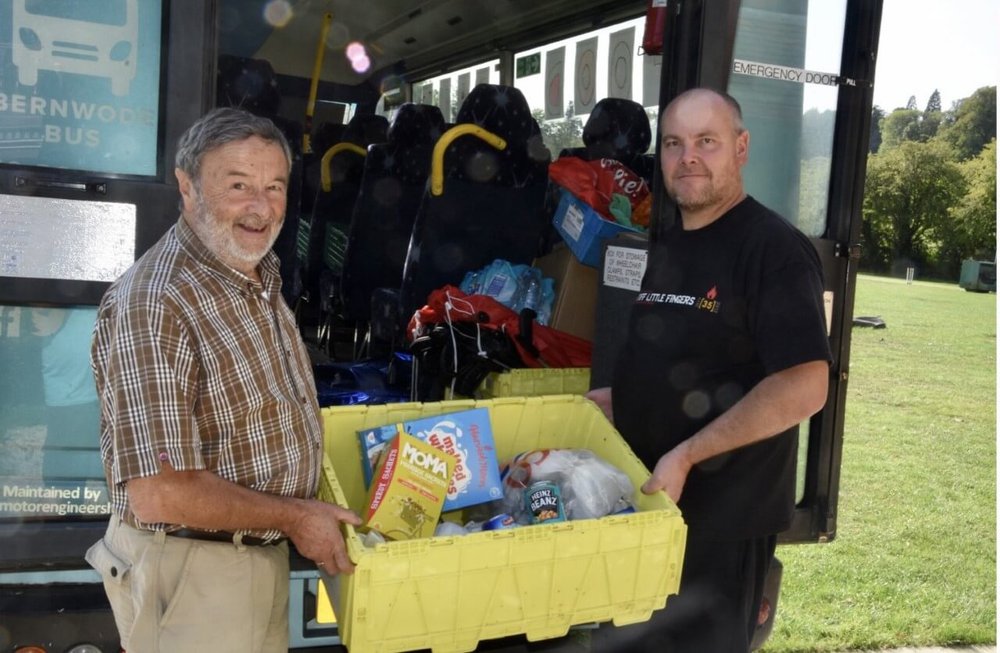 Cllr Paul Irwin with one of the Bernie the Bus volunteers